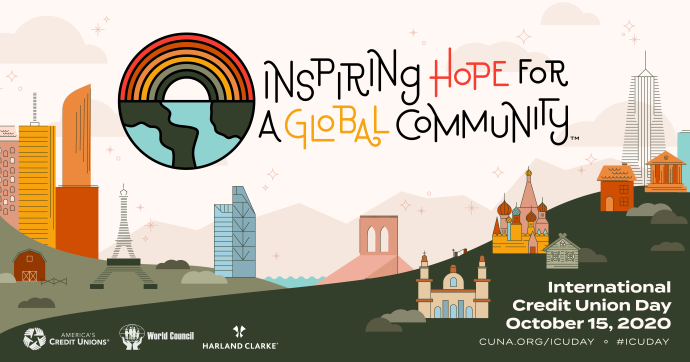 The ultimate goal is to raise awareness about the tremendous work that credit unions and other financial cooperatives are doing around the world and give members the opportunity to get more engaged. This year’s global health crisis has been trying for many communities around the world, but credit unions have stayed true to their mission “people helping people” and stepped up during this time of economic downturn.[/vc_column_text][/vc_column][/vc_row]

The first credit union was created in the mid-19th century. After organizing a cooperatively owned mill and bakery, Schulze-Delitzsch founded the first “people’s bank” in 1852 to provide credit to entrepreneurs in the city. Raiffeisen had established a credit society in Flammersfeld, Germany in 1849 that depended on the charity of wealthy men for its support. He remained committed to that concept until 1864, when he organized a new credit union for farmers along the principles of cooperative interdependence, a community-first mentality and a volunteer management structure that are still fundamental today.

On January 17, 1927, the Credit Union League of Massachusetts celebrated the first official holiday for credit union members and workers. They selected January 17 because it was the birthday of America’s “Apostle of Thrift,” Benjamin Franklin (1706–1790), who early credit union founders believed symbolized “the life and teaching embodied in the spirit and purpose of credit unions.”

Ironically, rapid growth within the North American credit union movement meant that people were either too busy to celebrate or too new to the movement to recognize the significance of the celebration. After a brief trial period, Credit Union Day quietly disappeared.

In 1948, the U.S. Credit Union National Association (CUNA) decided to initiate a new national Credit Union Day celebration. CUNA and CUNA Mutual Insurance Society set aside the third Thursday of October as the national day of observance. By then, many more of America’s credit union leaders believed there was a need for an occasion that would bring people together to reflect upon credit union history and achievements and to promote the credit union idea across the country.

Members around the world celebrate this special day in a number of ways. Some sponsor open houses, picnics, fairs, festivals and parades; others hold athletic competitions and essay or art contests for young members. This year we will celebrate our successes virtually and show our appreciation to our fellow credit unions around the world.

As our credit union joins in this unique and exciting celebration, remember that you are joined by more than 274 million members in 118 countries who also recognize and celebrate the credit union difference!

Ready to Get Personal?

Call us today at 845.452.7323 to learn more about the benefits of membership or visit us at any branch or CONTACT US here.